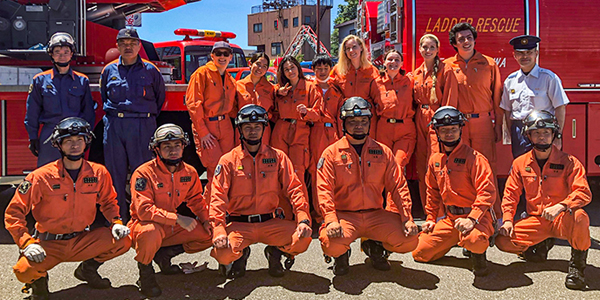 Since 1973, TSCA has been promoting friendship, goodwill, and understanding between the City of Torrance and the City of Kashiwa, Japan. The relationship now spans generations, and the goal of torrancesistercity.org is to provide resources for enhancing this people-to-people interaction.

If you're a newcomer interested in learning more about this intercultural friendship or joining our organization, this site offers you an overview of our activities: our student-exchange and adult-leader program, our annual Bunka-Sai festival, our adult delegations, and our English-teacher sponsorship.

If you're already a TSCA member, you can access and participate in our site's interactive features: staying up to date on latest news and upcoming events; downloading our newsletter, membership forms, and other documents; exchanging photos and keeping track of friends here and in Kashiwa.

At the same time, our broader vision is to offer something to those interested in the interrelation of our two cultures. The global community has changed remarkably since 1973, and we hope that, with advances in technology, we can add more dimensions to the relationship not only between Torrance and Kashiwa but between Japan and America.

All visitors to torrancesistercity.org are welcome to help make the site easy to navigate, fun, and genuinely enlightening.

From its beginning in 1973, the Torrance Sister City Association (TSCA) has been all about cultural exchange. When President Dwight Eisenhower inaugurated the Sister Cities Program in 1956, he envisioned "a better world for all" through a global network of people-to-people relationships between U. S. cities and cities in countries abroad. TSCA has brought this internationalism down to a very personal level through the programs we share with our sister city of Kashiwa, Japan.

Our Student Exchange Program is the foundation of our friendship with Kashiwa. Every July since 1974, Torrance sends a group of about eight students to Kashiwa for three weeks. In August, Kashiwa sends a group to Torrance. The students stay with host families and learn firsthand about the people, the culture, and the way of life. At the same time, they serve as youth ambassadors, representing the best of their city and their country. This annual tradition embodies the mission statement of TSCA: to promote friendship, goodwill, and understanding between Torrance and Kashiwa.

A carefully selected adult leader provides the guidance that ensures a good experience for our student delegates and their Kashiwa hosts. Any Torrance adult who meets TSCA's criteria is encouraged to apply to our Adult Leader Program.

Without our Host Family Program, the Exchange would not have become the success that it is. Our student ambassadors are hosted by the families of the Kashiwa delegates, and our students' families return the favor when the Kashiwa students come to Torrance. But TSCA wants as many Torrance families as possible to share in this extraordinary experience, so the home stay period is limited to a short 10-12 days. Kashiwa students needs two host families during their stay, and any Torrance family is encouraged to apply.

To promote the Student Exchange and to bring home the experience of our student delegates to their Torrance community, TSCA hosts its annual Bunka-Sai at the Torrance Cultural Arts Center. This cultural festival offers an array of Japanese-themed entertainments, exhibits, food, arts & crafts, and gifts. Recognized local masters give virtuoso performances in dance, calligraphy, martial arts, and music, to name only a few of the attractions that draw visitors from great distances. It's a two-day celebration of Japanese culture that has been an unbroken tradition in Torrance since 1973.

From its beginning, TSCA has focused on the importance of young people in creating a better future through global friendship. We continue to promote various kinds of relationships between Torrance and Kashiwa students, such as the Sister Schools Program, in which North High School currently maintains its own exchange with Kashiwa Municipal High School.

But TSCA is not just about young people.

Since 1979, TSCA's English Teacher Program has sponsored qualified English teachers from Torrance who live in Kashiwa and work for 1-3 years as ALTs (Assistant Language Teachers) at Kashiwa Municipal High School. Kashiwa provides generous accommodations for these ALTs, who work closely and individually with Kashiwa students.

Another opportunity for adults to become involved in TSCA occurs every five years, when Torrance and Kashiwa exchange delegates as part of its Goodwill Anniversary Visits Program. Each delegation includes the Mayor, city officials, and Sister City Association members. Like the Student Exchange, the Anniversary Visit delegations are hosted on alternate months, usually in the late fall and early spring. This exchange strengthens the ties of friendship, goodwill, and cooperation between the two cities, a relation symbolized each year by the planting of trees during the anniversary celebrations: a Kashiwa oak planted in Kashiwa and a cherry tree planted in Torrance (on the east lawn of the Cultural Arts Center).

The traditions of TSCA have endured for almost 40 years, spanning multiple generations of exchange students, whose own children are now, in turn, becoming delegates. We could not have accomplished so much without the help of people who care about the future of our city, our country, and our world. The City of Torrance provides sponsorship in many substantial ways. And from its inception, TSCA has operated under the guidelines of Sister Cities International (which has presented TSCA with 11 awards since 1978). But it is mainly the people of Torrance and Kashiwa who have worked hard to establish and nurture the friendship between our cities. Together we've established a solid foundation for achieving what President Eisenhower envisioned: a better world for all.

What Is the Sister City Program?

President Dwight D. Eisenhower started the Sister Cities Program in 1956 as a people-to-people, common-sense approach to world peace. He said, "The Sister Cities Program is an important resource to the negotiations of governments in letting the people themselves give expression of their common desire for friendship, goodwill, and cooperation for a better world for all."

Sister Cities International (SCI), the parent organization, was founded in 1956 and is the world's largest citizen-diplomacy network, creating and strengthening partnerships between U.S. cities and cities in countries abroad. It is the national, nonprofit, volunteer organization of U.S. communities linked globally to promote lasting friendships through a variety of programs.

Regional chapters provide a link between the SCI National Office in Washington D.C. and the local organizations. California's northern and southern regional chapters are models in promoting the programs of Sister City International. Both chapters sponsor annual conferences and offer awards for SCI internships and academic scholarships.

How Did Torrance Get Involved?

In 1970, a Kashiwa citizen approached the Torrance Lions Club and the Chamber of Commerce about a sister city relationship. On February 20, 1973, the relationship became official, with then-mayors Ken Miller and Ryotaro Yamazawa signing the affiliation papers.

The Torrance Sister City Association (TSCA) became an independent, nonprofit organization in 1976. It is governed by a 15-member volunteer Board of Directors, supported by volunteer members. TSCA works closely with the City of Torrance, through which it receives an annual grant, the Torrance Unified School District, and many other local businesses and organizations. 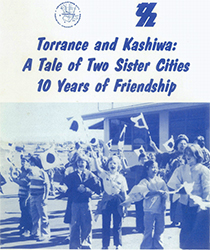 Published in 1984, Dr. Thomas Rische's classic 10th Anniversary retrospective of the Torrance-Kashiwa exchange has been converted to a .pdf document. Get your copy now, and begin learning about the history of TSCA and enjoying archival photos. Download it here! (20MB .pdf)